The flood plain of the River Arun was a hunting ground for fish and wildfowl attracting people since the Neolithic times who camped on the higher ground around the marsh.

In the Iron Age leading up to the Roman occupation signs have been found of an important settlement on the hill just north of Pulborough showing that there were strong trading links to the Romans before the birth of Christ but their presence grew substantially from around 100AD and for the next 200 years or so.

The Roman occupation of Pulborough created a sophisticated community with a temple a heated civic recreational bath-house, a palatial villa and other dwellings, important roads and river trade along the Arun, known then as Trisantona. Additionally there was substantial production of domestic and other products for local use and trade – the evidence of this can be seen by visitors today.

The Romans probably built their first road in Britain, late known as Stane Street, from Chichester Harbour to Pulborough – Pulborough was that special! – it was only later when Boudicca was defeated and London progressively developed to be the administrative centre of Britain that the road was extended to London and other roads built in Sussex.

On the edge of Pulborough there was a way-station (or mansio) on Stane Street at Hardham which provided accommodation for official travellers and was a toll gate. Hardham was the start of the Sussex Greensand Way that ran eastwards across Pulborough Brooks heading for Hassocks and then Barcombe, north of Lewes, connecting to other north-south roads.’

Pulborough’s legacy of this period – what to see & where

To see some of the artefacts from Pulborough’s early history visit Worthing Museum.

On display there is a well -preserved stone pestle dating from the Bronze Age found at Nutbourne Common and the “Broomershill Hoard”, a collection of 13 early bronze axes or palstaves. Recently a team from Worthing Archaeological Society excavated over 100 flint arrowheads at Brinsbury Farm from the early Bronze Age – these represent the largest collection of such objects to be found in Britain to date and an example is shown here. A little further away a Stone Age settlement at Buster hill can be visited.

The “Pulborough Hoard” – consisting of 1559 silver coins minted between 252 and 273 AD, found in the river on the Brooks in a bronze container by two local children – it is pictured here and is on display in the Museum. Also found in the river was a very rare large lead baptismal font which dates from the 4th century AD which is on display at Parham House.

To see more evidence of the Roman presence visit Roman Villa at Bignor which is about five miles south west from Pulborough to see some well-preserved mosaic floors and other Roman artefacts similar to those excavated in Pulborough.

You can also walk part of the Roman Road, Stane Street, from Pulborough to Chichester. From the top of Bignor Hill, where you can park (OS map reference SU 9738 1292), the Roman Road is very clear and is a beautiful walk for about a mile.

On the edge of Pulborough there was a way-station (or mansion) on Stane Street at Hardham which provided accommodation for travellers and was a toll gate; it had a The Sussex Greensand Way had a causeway across Pulborough Brooks which also linked to the Roman Bath House which is still evident – see the picture here and can be found on the Brooks Walk – leaflets are available from the station, library and WWW 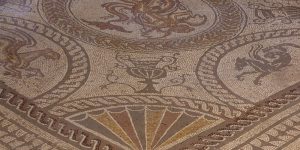 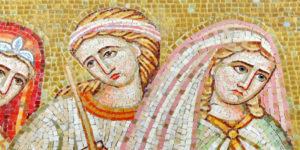 Pulborough from Saxon to Modern Times 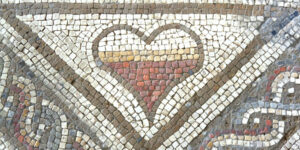 NextPulborough from Saxon to Modern TimesNext